We’ve got some Mariners news items before heading off to Thanksgiving, so let’s get to it.

Cortes spent most of the 2019 season in the Yankees bullpen, going 5-1 with a 5.67 ERA, but when he was in Triple-A he was used as a starting pitcher. He has a 3.11 ERA in 42 career appearances (31 starts) at the Triple-A level. In the majors Cortes had a home run problem, just like MLB itself.

He will be added to the Mariners 40-man roster, which now has three open spots on it. Cortes reportedly has two options years remaining, so he could spend time in Tacoma in 2020 and 2021.

One of the Mariners big weaknesses in the farm system is advanced-level left-handed pitching, so Cortes helps in that area. The Rainiers went most of the 2019 season without a lefty in the bullpen, although there were a few in the starting rotation: the improving Anthony Misiewicz, and the veteran Sean Nolin who is currently a free agent.

The Baseball Prospectus website unveiled its Seattle Mariners Top Prospects package, which features in-depth write-ups of key players in the organization. It’s a subscription site, but here’s how they ranked the Mariners Top Ten:

One indication that the farm system has really improved is the simple fact that there are no minor league relief pitchers on the top ten prospects list.

Speaking of Evan White – he’s No. 4 on the list above – the Mariners have signed him to a six-year, $24 million contract with three years of team options tacked onto the end of it. White has played in 92 Double-A games and four Triple-A games.

This is a gamble for the Mariners, who believe that White will become at least an average major league first baseman in the near future. Meanwhile, White gave up a lot of potential future earnings should he become an above-average major leaguer, and especially if he becomes a star.

The M’s take a big risk here that White doesn’t become complacent now that he is set for life financially. The Astros tried this type of contract with a highly ranked minor league prospect named Jon Singleton and it was a big waste of money for the team.

Current major leaguers who inked this type of deal before spending a day in the big leagues include Philadelphia’s Scott Kingery (struggled as a rookie, much better in year two) and the Chicago White Sox slugger Eloy Jimenez (decent rookie season).

Hearing rumblings that the Mariners are signing a power-hitting Triple-A corner infielder. This is a wise move as Tacoma badly needed power in the lineup last year. The player in question has smartly hit over 30 homers in a season twice in the PCL while playing in the American Conference. A veteran whose sagacity could only help younger players. I’m still waiting for a little more knowledge about the situation before confirming it.

Comments Off on M’s Add Lefty, A Top Prospects List, Maybe A Power Hitter For Tacoma? |

The Wind Surge are formerly the New Orleans Baby Cakes. The New Orleans franchise relocated to Wichita, where construction of a new downtown ballpark is nearing completion. They will be the Miami Marlins affiliate this year.

The nickname of the team will be shortened to Surge, I suspect, in most instances. Primarily because “Wind Surge” is kind of hard to say – it doesn’t just roll off the tongue. Go ahead and say it out loud. It’s hard to make it flow smoothly.

These are the main and alternate logos. 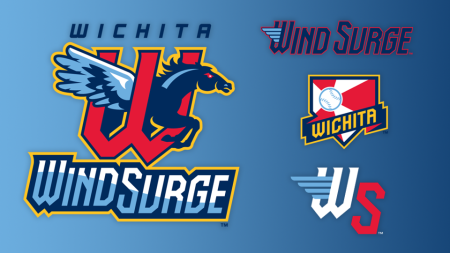 The Surge will make its first visit to Cheney Stadium for a four-game series August 8-11, 2020. Tacoma should take its first road trip to Wichita in 2021.

The Rainiers announced they will be participating in Minor League Baseball’s Copa de la Diversion initiative once again, as Familia de Tacoma. A new design was released via the team’s social media, if you missed it.

The Rainiers are doing a cool local fundraiser, helping the kids at Jason Lee Middle School raise money to install solar panels at the school. Five dollars from every hat purchased at the Rainiers Team Store this month is being donated to the project. More info can be found here.

Do some early holiday shopping for a loved one (or yourself) and pick up a hat or two this month.

Today Baseball America released the complete list of minor league (or so-called “six year”) free agents. Any player who has at least six full seasons of minor league experience and is not on a major league 40-man roster can become a free agent. Also, players who have previously been released by one organization and signed by another become free agents after the season, without needing six years.

A large number of players who finished the season with Tacoma qualify as free agents. Copy-and-pasted from Baseball America, here is the full list of Mariners:

A couple of notes:

The Mariners announced their major league coaching staff for 2020.

The new pitching coach is Pete Woodworth, who is being promoted from Double-A Arkansas. Former minor league field coordinator Carson Vitale – a frequent visitor to Cheney Stadium in recent years – has been promoted to the major league staff. Manny Acta has been moved to third base coach.

The Rainiers Have A New Pitching Coach

We knew Tacoma would have a new pitching coach in 2020, once Lance Painter and the Mariners parted ways after four years in Tacoma.

Class-A Modesto pitching coach Rob Marcello has earned a two-level promotion in the farm system, and will be joining Tacoma for 2020. Marcello made the announcement on his twitter account.

Marcello won the Dave Henderson Minor League Staff Member of the Year award for his work at Modesto this year, with his pitching staff ranking second in the California League in ERA (3.36) and strikeouts (1442 in just 1222.1 innings). Modesto broke the California League record for most strikeouts in a season – but so did Rancho Cucamonga, which finished a few K’s ahead of Modesto.

The 29-year-old was in his first season as a professional pitching coach this year, after the Mariners hired him out of a pitching academy in Orlando, Florida. He’s an example of the new trend in player development that many teams are now following, in which instructors without the traditional background (eg: ex-players) are hired because of their knowledge of the latest technologies and ability to translate the numbers into effective teaching. His former academy – Top Level Athletes, or TLA – presents itself as a destination for “data influenced training.”

Marcello did briefly pitch professionally. He was drafted in 2013, as a 17th round pick by the Philadelphia Phillies, and he spent one season with their Williamsport affiliate in the New York-Penn League. He then moved into coaching, with the academy and at a couple of small colleges, before being hired by Seattle.

He had a very successful season in 2019 with the Modesto group. Triple-A will be a different challenge for Marcello, with the revolving-door pitching staff made up of guys who are new to the organization and often older than him. Hopefully he can help generate some strong results, and bring Tacoma back to being one of the better pitching clubs in the PCL as we have traditionally been.

With the World Series over – congrats to the Nats, thanks for beating the Astros, and thanks for making my Sure-To-Be-Wrong Predictions wrong once again after that embarrassment in 2018 – it’s now roster change season in baseball.

The Mariners have already made a handful of moves, “cleaning up” the 40-man roster, activating players who were on the injured list and deciding what to do with them. They even claimed a pitcher off waivers who might be a Rainiers starter next year. These moves are detailed in the links below.

We’ll follow the player moves and any PCL news all winter, so be sure to check in every once in a while.

Comments Off on The Rainiers Have A New Pitching Coach |