Today is a big day on the minor league side of the Mariners spring training complex in Peoria, Arizona: it’s the first workout for minor league pitchers and catchers.

The position players report this weekend, and next week they’ll have full squads working out for all four full-season minor league teams, plus several dozen more players who are ticketed for the two short-season league teams (these guys are in for a long stay in Arizona).

If you’ve never been to Mariners spring training before, this is what the scene is like: there is one large stadium that is very similar to a Triple-A ballpark. This is where the major league Mariners play their Cactus League games.

Surrounding this one, nice stadium are about seven other well-maintained baseball fields*. These don’t have fan amenities (other than maybe a single bleacher) but the playing surfaces are nice. These fields are where the Mariners minor leaguers work out, and they’ll see a ton of action once the full minor league squads report this weekend.

Here’s an aerial shot of the Mariners side of the complex. The minor league fields are where I hang out on my annual trip to Peoria (which is coming in less than two weeks!).

We’ll continue looking at Rainiers players in the exhibition games as spring training moves on:

There were actually some decent Tacoma relief appearances in the 10-8 game: Mayckol Guaipe tossed 1.2 scoreless innings, and David Rollins worked a shutout frame.

The Mariners had just five hits in this game, and all five were by players who might be Rainiers on April 7th… O’Malley, Robertson, Powell, Tyler Smith, and Ed Lucas had the hits… O’Malley also stole two bases.

Pitching was good, including a strong outing by likely Rainiers starter Joe Wieland. Wieland tossed three innings, allowing one hit and one run… Tony Zych delivered a clean 1-2-3 inning, with a pair of strikeouts.

I have arrived in Las Vegas for my favorite offseason event of the year, the Pac-12 Basketball Tournament. Yet there will still be a new blog post on Friday – probably just a bit later in the day than normal.

* The seven fields are on the Mariners side only – there are probably another seven fields on the Padres side of the complex.

Comments Off on Mariners Minor League Camp Fires Up |

Mariners exhibition games are in a daily rhythm now, and the M’s crack PR team makes sure I get a box score in my inbox shortly after each one.

Let’s take a look at the M’s games from the weekend, and see how some potential Rainiers players did in the games.

Possible Rainiers left fielder Mike Baxter was the story in this one, hitting a two-run homer off Brewers RH reliever Jim Miller. It was the M’s only extra-base hit of the game. Possible Rainiers catcher Steve Baron and third baseman Ed Lucas each hit singles.

On the pitching side, Cody Martin delivered two scoreless innings of one-hit ball in a relief role (although I think he’ll be a starter if he is in Tacoma). Lefthander Paul Fry chipped in with a scoreless frame.

Chris Taylor – who does have a decent chance to make the M’s roster – had a single and a walk in two plate appearances. Tyler Smith played third base and went 1-for-2. Daniel Robertson started in left field and went 1-for-2, hitting his second double of the spring.

Saturday wasn’t a good day for the bullpen, which allowed a lot of hits and walks.

All three of the players battling for the Mariners utility infielder spot had a good game. Remember, it’s likely two of these three players will end up with the Rainiers. Luis Sardinas continued his hot start with two hits, including a double, a stolen base, and two runs scored. Chris Taylor was 1-for-2 with a steal and an RBI single. Shawn O’Malley went 2-for-3, stole two bases, and scored two runs.

The team mostly used major league pitchers on Sunday, although Paul Fry and Blake Parker each delivered a scoreless inning from the bullpen. Parker is an interesting player if healthy – he’s dominated the PCL previously while with Iowa.

The Rainiers front office tried to put a bored Rhubarb The Reindeer to work during the offseason. Results were, well… you’ll see.

We are exactly one month from Opening Day! Get your Rainiers opening weekend tickets right here.

Comments Off on Rainiers In Peoria – Weekend Update |

Rainiers Manager Works With His Players In Peoria

Listach and Double-A Jackson manager Daren Brown were invited to help with major league camp. This is pretty standard for most organizations: there are so many players in camp, extra coaches are needed. More players means more batting practice to throw, more fungos to hit, more instruction, and more experienced eyes needed to make evaluations.

The Mariners have sixty players in major league camp – more than twice the number who will comprise the opening day roster. Many of the sixty will be on the Rainiers opening day roster, so it makes a lot of sense for Listach to be there.

Listach said that sixty players is far too many to have on one field for batting practice and defensive drills, so they divide them into two groups of thirty. The players split off to either Group A or Group B, and Listach has been put in charge of Group B.

Now that the Cactus League games are underway, the team takes batting practice and infield (along with additional drills) in the morning, then plays the exhibition game at 1:00. Still lots of work for extra coaches.

By this point, your Triple-A manager has already been working with nearly everyone who will be in Tacoma on April 7. It’s a good way for Listach to learn all of his personnel.

Have a good weekend, and if you’re cleaning out the attic don’t throw away any paper bags without seeing what is in them.

This morning the Mariners announced that they have signed PCL superstar Efren Navarro to a minor league contract, immediately inviting him to major league spring training.

PCL fans know Navarro: he’s been the toughest out in the Salt Lake Bees lineup for the past five years. Here are his numbers in the PCL – batting average/on-base percentage/slugging percentage:

He’s a career .316 hitter in the PCL, and he does all of this while playing gold glove quality defense at first base.

In recent seasons Navarro has been moved to the outfield because first base in Anaheim is blocked by Albert Pujols. He’s spent about half of each of the last two seasons as a reserve player in the majors.

Navarro is the modern-era Salt Lake franchise leader in almost every offensive category, and someday they’ll honor him at Smith’s Ballpark. In the meantime, maybe we’ll get him in Tacoma this year?

Exhibition games start today! The Mariners face the Padres at 12:10 (Pacific), and it’s radio only on 710 AM – listen as my radio buddies shake off the offseason rust! (Actually, Rizzs is a machine – he’s in midseason form 365 days/year). 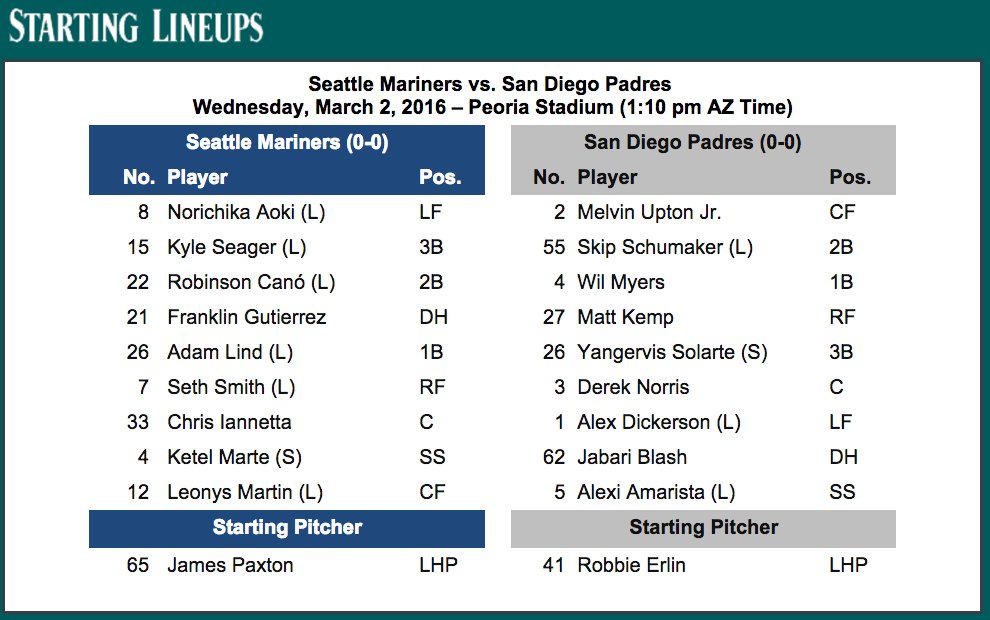 Hey, don’t we know one of those Padres?